Why did renewables become so cheap so fast? And what can we do to use this global opportunity for green growth? 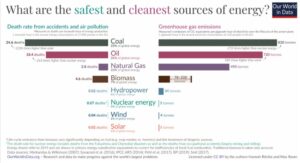 Our World in Data presents the data and research to make progress against the world’s largest problems.
This blog post draws on data and research discussed in our entries on Energy, Fossil Fuels, and Renewable Energy.

For the world to transition to low-carbon electricity, energy from these sources needs to be cheaper than electricity from fossil fuels.

The fundamental driver of this change is that renewable energy technologies follow learning curves, which means that with each doubling of the cumulative installed capacity their price declines by the same fraction. The price of electricity from fossil fuel sources however does not follow learning curves so that we should expect that the price difference between expensive fossil fuels and cheap renewables will become even larger in the future.

This is an argument for large investments into scaling up renewable technologies now. Increasing installed capacity has the extremely important positive consequence that it drives down the price and thereby makes renewable energy sources more attractive, earlier. In the coming years most of the additional demand for new electricity will come from low- and middle-income countries; we have the opportunity now to ensure that much of the new power supply will be provided by low-carbon sources.

Falling energy prices also mean that the real income of people rises. Investments to scale up energy production with cheap electric power from renewable sources are therefore not only an opportunity to reduce emissions, but also to achieve more economic growth – particularly for the poorest places in the world.

The world’s energy supply today is neither safe nor sustainable. What can we do to change this and make progress against this twin-problem of the status quo?

To see the way forward we have to understand the present. Today fossil fuels – coal, oil, and gas – account for 79% of the world’s energy production and as the chart below shows they have very large negative side effects. The bars to the left show the number of deaths and the bars on the right compare the greenhouse gas emissions. My colleague Hannah Ritchie explains the data in this chart in detail in her post ‘What are the safest sources of energy?’.

This makes two things very clear. As the burning of fossil fuels accounts for 87% of the world’s CO2 emissions, a world run on fossil fuels is not sustainable, they endanger the lives and livelihoods of future generations and the biosphere around us. And the very same energy sources lead to the deaths of many people right now – the air pollution from burning fossil fuels kills 3.6 million people in countries around the world every year; this is 6-times the annual death toll of all murders, war deaths, and terrorist attacks combined.1

What the chart makes clear is that the alternatives to fossil fuels – renewable energy sources and nuclear power – are orders of magnitude safer and cleaner than fossil fuels.

Why then is the world relying on fossil fuels?