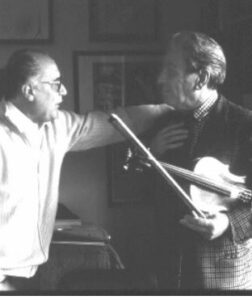 “Vittorio Emanuele Rimbotti award for inclusion”, created by the Rimbotti family and the Piero Farulli Association – music a good to be returned to the non-profit organization within the Farulli 100, will be presented to the 7insiemeperPiero ensemble which will perform on July 27 in Montepulciano (Siena), at 6 pm on the occasion of the 45th edition of the International Shipyard of Contemporary Art, founded by Hans Werner Henze.

After the performance, the prestigious award will be given to the musicians by Pier Francesco Rimbotti, President of Infrastrutture S.p.A., son of the Cavaliere del Lavoro Vittorio Emanuele Rimbotti, First president of the Fiesole Music School Foundation, to which he gave a strong impulse by fighting alongside Farulli the cultural battle to offer everyone the culture of music.

The prize is named after him as Farulli’s convinced ally in considering music as an instrument of social cohesion and a teacher of solidarity.

“It is wonderful to dwell today in the midst of so many conflicting factors in the development of society to reflect together with this prestigious musical ensemble, to the universal value of peace that Piero has always intended to give to music, to the historical friendship that has linked Piero Farulli to Vittorio Emanuele Rimbotti for almost twenty years that has allowed the Music School of Fiesole to reach the most ambitious goals at European level, all with the solid helm of Adriana Verchiani, an indefatigable witness in renewing this message of music, a gift to be returned. ” said Pier Francesco Rimbotti, President of Infrastrutture S.p.A.

“Farulli 100” will bring throughout 2020 a series of initiatives in various cities of Italy and Europe – with Florence in the center – in places particularly significant for its artistic history with the aim of remembering the message and the tireless commitment by the Maestro (Florence, January 13, 1920 – Fiesole, September 2, 2012) who profused himself in training, teaching, for the recognition of the “cultural value of music”.