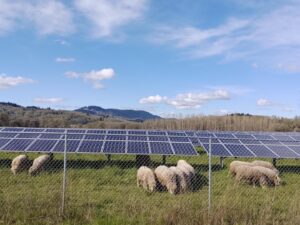 Scientists at the Oregon State University have made a comparison between lamb growth and pasture production from pastures in agrivoltaic systems and traditional open pastures over a two-year period and have found the combination of lamb grazing with PV power production has several advantages for both activities.

In the paper Herbage Yield, Lamb Growth and Foraging Behavior in Agrivoltaic Production System, published in Frontiers in Sustainable Food Systems, the US group explained that the grazing experiment was conducted at a 1.4 MW agrivoltaic facility located on the university’s premises in spring 2019 and 2020. The PV system is east-west oriented and the panels are placed at a height of 1.1 MW from the ground, with a 6 m distance between the panel rows.

The foraging behavior of the lambs was monitored by visual scanning at five-minute intervals from 8 a.m. to 4 p.m. and herbage mass was measured in each plot. The researchers also took measurements on land-use efficiency for total annual herbage and lamb liveweight production. “To calculate the net returns from the onsite grazing activity, we averaged the daily liveweight production in 2019 and 2020, multiplied by the average number of grazing days across both years, and assumed an average price of $316.19 per hundred kg weight based on the USDA average price of lambs in 2018,” the scientists stated.

The experiment showed that the annual forage yield in solar pastures was lower compared to open pastures, which the scientists attributed to poor production in fully shaded areas. They also ascertained, however, that solar pastures showed higher forage nutritive value, which offset the lower herbage mass, leading to similar lamb liveweight gains in both the solar and open pasture fields. Their measurements also demonstrated that 45% of the lambs’ grazing activity took place in shade directly under the solar panels. This percentage rose to 96% for its ruminating and idling activities.

Furthermore, the research team found that the lambs’ daily water consumption was similar for both solar and open pasture filed during early spring, and that lambs in open pastures drank more water than those under the PV system in the late spring period. “There was no difference observed in water intake of the lambs in spring 2020,” it emphasized, adding that the shade created by solar panels can be more beneficial to animal welfare and water consumption in hot and arid regions. “Furthermore, agrivoltaics systems may alleviate the need of artificial shelter provision to livestock, also reducing the initial infrastructure cost in pasture-based livestock production.”

According to another study published by the same research group in January, using land for both solar photovoltaic power and agriculture could provide 20% of total electricity generation in the United States.